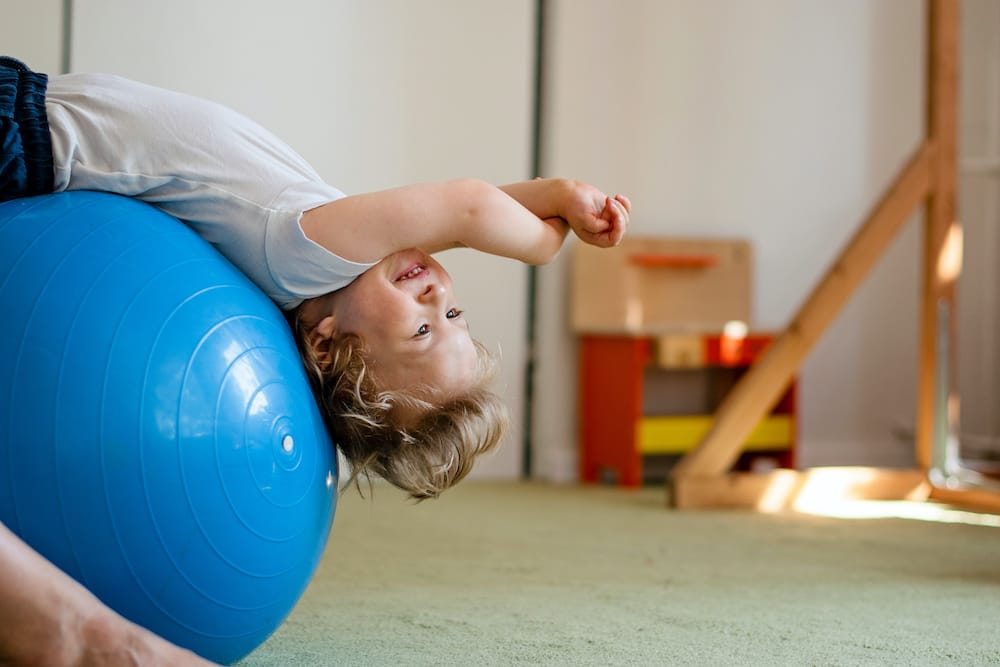 After completing an initial assessment with our Neurokinex team, it is common for clients to ask us how many rehabilitation sessions they should be completing a week and for how long to get the best physical outcomes.

The usual response when considering a neurological condition is ‘as often as possible’ and ‘for the foreseeable future’. At Neurokinex, we recommend intensive blocks of sessions to excite the nervous system and awaken dormant pathways to establish a strong connection between the central nervous system and functional movements. 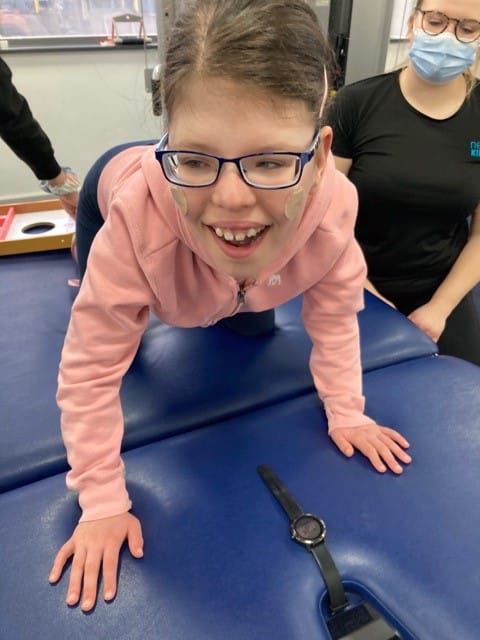 When it comes to working with youngsters, we have the additional opportunity – and need – to tap into their greater neural plasticity while they’re still young. A recent study suggests that in children with Cerebral Palsy, more frequent sessions should be considered when the focus is to improve gross motor function.

One young client of ours, Ella, is a very good example that supports the idea that increased frequency and consistency within rehab of children with CP has greater immediate – as well as carried over – outcomes in comparison to the same volume of sessions over a longer period.

Ella is a delightful eight-year-old girl with Cerebral Palsy and hydrocephalus who is non-verbal.  In early 2018, her parents sought out Neurokinex Kids as an added input to help towards her functional independence, overall strength and walking ability.

Ella already had a school physio and attended conductive education sessions. There was a lot of different input but limited consistency in both session frequency (often weekly or fortnightly) and therapist style, meaning that improvements, although made, were small and hard to see.

When Ella first arrived at Neurokinex, she could operate a manual wheelchair over short distances and only ambulate when held up with adult assistance.

Her big goal was to improve her gait and walking endurance, to allow independent movement so that she would have more freedom as she grew up. Ella was unable to obtain a four-point kneel position or initiate crawling and when getting into these positions would become very upset. She found transitional movements very hard, such as getting up from lying down to sitting or sitting to standing up.

The 2020 Covid-19 Lockdown meant Ella had no access to physiotherapy for four months other than her parents’ efforts at home. In July 2020, Neurokinex re-opened as an essential rehabilitation service.

Making the most of the fact that it was another two months before the schools re-opened, Ella increased her Activity Based Rehabilitation sessions at Neurokinex to three sessions per week for six weeks to really try and increase 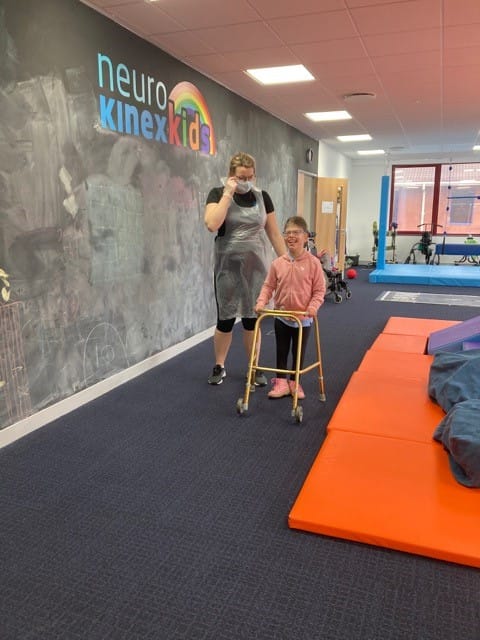 her overall strength and independence.

Ella has a fantastic memory so we planned to make her sessions very similar in structure with minor changes each day to work towards different goals with the hope that this would translate into muscle memory.

An example of a session would be to start for 10 minutes on a treadmill (with mirrors), then progress to overground independent walking in her own frame followed by the second half of session doing floor-based activity.

We primarily use the GMFM (Gross Motor Function Measure) among other assessments to assess Ella’s functional ability.

We found that Ella not only improved in all five dimensions of the GMFM (as seen in the table below) but also greatly improved her communication with her Neurokinex trainer.

As a result of this intense rehabilitation block, Ella understood far more what tasks were being asked of her and facilitated quicker thinking processes and responses.

Now that Ella’s sessions are back to being fortnightly, she has better retention of information and excellent comprehension when learning new tasks. We no longer have tears or push back in sessions which were common at the beginning when trying new activities.

Each time Ella attends a session with us, she brings with her news that she has accomplished something new. We love working with Ella and are delighted that the intensive sessions we completed have given her the capacity to make greater gains now.

We all have high hopes for her continued progress as she grows and moves forward on her journey to independence.

* The conclusion of this 2020 study was: ‘Our results suggest that when gross motor improvement is prioritised, high-frequency physical therapy should be considered for children with CP’.