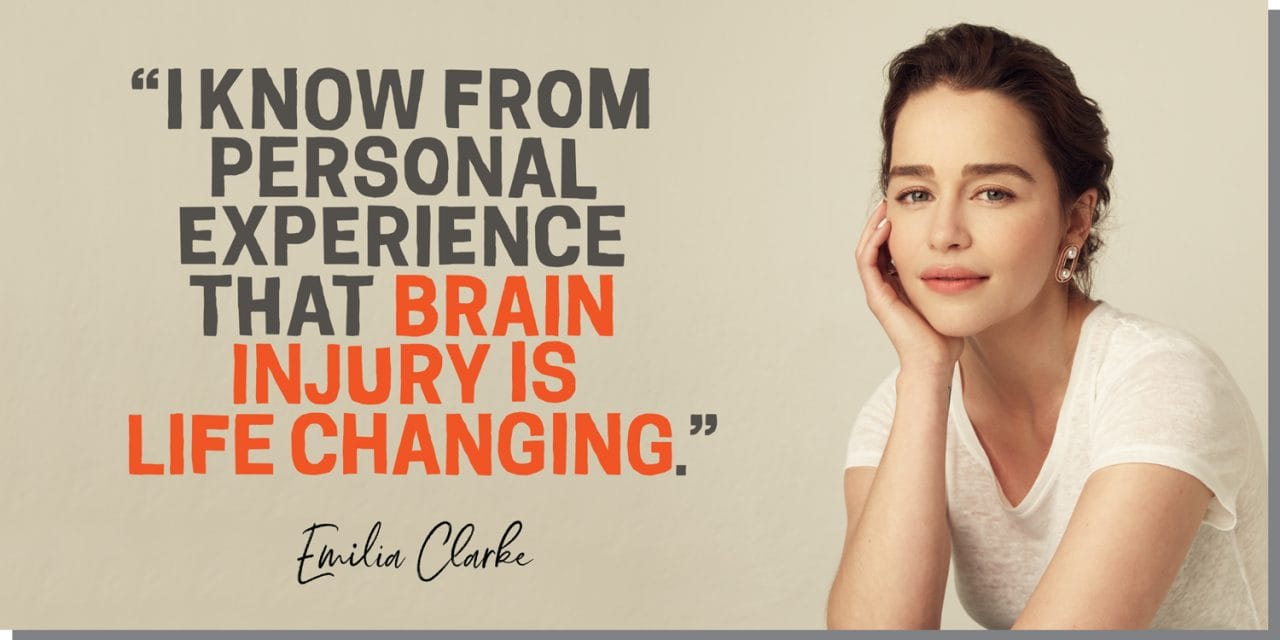 As the CEO of the charity SameYou committed to making a difference to the lives of people living with brain injury, as well as being the mother of survivor Emilia Clarke, and a patient herself, Jenny Clarke truly understands the impact of acquired brain injury.

In a twist of fate, like her daughter Emilia, Jenny also has two mirror aneurysms in her brain. While Emilia almost died twice, mercifully Jenny did not experience such traumatic illness – yet its impact it still life-changing. 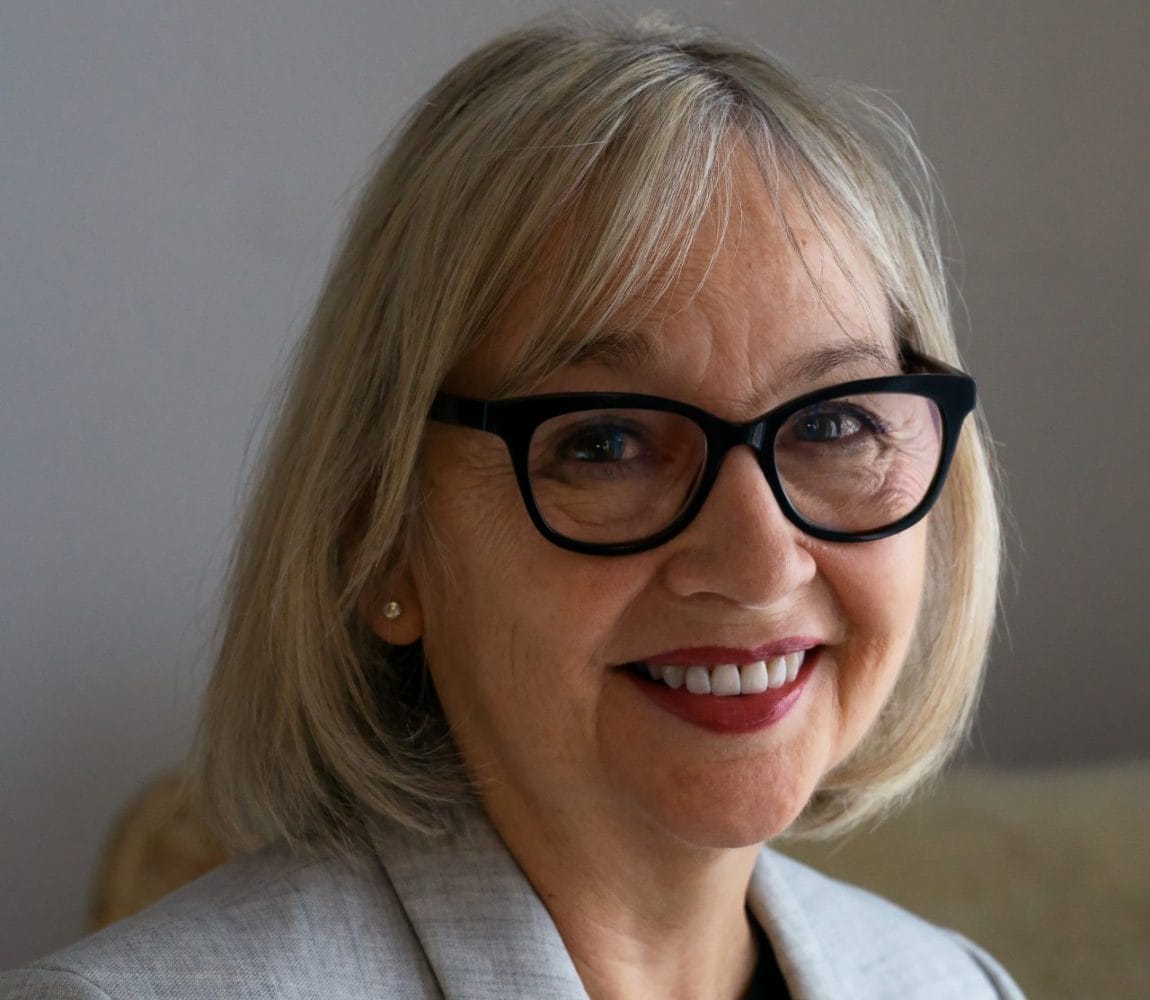 “It’s familial, apparently. It was a complete fluke that I found out, really,” says Jenny.

“I went for an MRI scan, and they said, ‘You’re fine, but did you know you have two aneurysms?’ It was a shock.

“So I do understand what it’s like to have that diagnosis, especially after what happened to Emilia.”

Emilia’s story is, of course, now well documented. Globally-famous Emilia, best known as Daenerys Targaryen from Game of Thrones, had the first of two brain haemorrhages in 2011, just after she had finished filming season one of the iconic series.

The Emmy-nominated actor and her family continue to be indebted to the National Hospital for Neurology and Neuroscience (NHNN) Queen Square in London, which they credit with saving Emilia’s life.

Emilia has since become an ambassador for the Royal College of Nursing and Nursing Now, after the hugely positive impact of nursing care during her time in Queen Square; indeed, her relationship with her nurse at NHNN continues to this day.

Her second haemorrhage, in a hospital in New York two years later, was caused when a preventative procedure failed.

“We realised we had to do something because she has a global platform. It took a long time to tell her story, it is very, very difficult to talk about. There is stigma and shame attached to it, people don’t know what to say, there is no common language,” says Jenny.

“Shockingly, brain injury is the biggest problem in the neurological world, it’s bigger than dementia – but who is saying anything about it?

“Emilia had no idea (anything was wrong) before her first aneurysm, we had no history of stroke in the family, there was no warning. She was going through this tremendous transition with Game of Thrones when she nearly lost her life.

“Then two years later, she came even closer to losing her life when her preventative treatment for her aneurysm went wrong, which I think highlighted how fragile the brain is. But she was lucky, being young and very fit, she survived, and has learnt to manage her residual fatigue, but our family knows how hard it is to cope with the impact of a sudden brain injury.

“This whole experience made us realise how very different things could have been.”

Committed to changing the situation, Emilia established SameYou, a UK and USA registered charity which tackles the issue of the lack of neurorehabilitation and stressing the need for holistic and ongoing care and support once an ABI survivor leaves hospital.

Building on Emilia’s profile and personal experience, alongside Jenny’s expertise in business, the charity is already making waves around the world. With a website – sameyou.org – bustling with signposting information through its UK Neuro Recovery Directory, advice from leading experts and inspirational video content, survivors can find a host of resources on a daily basis, while knowing SameYou is fighting hard on their behalf in the background to bring about change.

SameYou is also collaborating with global partners to find and test new treatments, with a number of exciting projects already underway.

“We decided the biggest gap we could see was in rehabilitation, there is next to nothing. If you’re severely injured, or have a TBI or stroke, then you can get up to 12 weeks of rehabilitation in the UK it’s similar in the States, but resources are so scarce.

“The accessibility of neurorehabilitation at the moment is completely inequitable. If you’re lucky enough to be referred to Queen Square, then lucky enough to get in, then you have access to this fantastic care – but when you have a brain injury, it does alter the way you live your life. Often, people have no hope and thousands of survivors tell us they feel abandoned.

“We want to put all our energy into this to make sure people get access to the resources and support that will help them recover.”

The scale of the task ahead is something Jenny and the SameYou team continue to be shocked by but determined to make a positive difference – “We are certainly punching above our weight as a small startup, but believe that partnerships to deliver change will make the most impact on survivors and their families,” says Jenny.

“The only positive thing I can say about COVID is this new consciousness is that people are realising hat recovery care is essential. Everyone understands the need for research, and the fantastic advances in acute care, but recovery is not prioritised,” says Jenny.

“Successive Governments around the world have ignored it, social services can’t provide it. We want to make as loud a noise as possible to represent the voices of brain injury and stroke survivors and their carers.

“When I was a child, my grandmother and aunt had cancer and that was almost shameful – but look at how we regard cancer now. It shows the great strides we have made in that area, and I see that we are at the start of making that change with brain injury.

“I do feel that there are so many people who want to make a difference – and who are doing great work, but our impact is reduced without collaboration.”

And through such collaboration, SameYou is already making its mark.

One area it is particularly passionate about is nursing care and in partnership with the RCN Foundation and the University of Edinburgh has developed the landmark Advanced Practice Neurological Rehabilitation Education Programme, to enable better care for young people recovering from brain injury and stroke.

“When the brilliant neurosurgeons have saved your life, you don’t get to see them often and the continuity of care is delivered by nurses. If you have a specialist nurse who combines her clinical experience with care and compassionate that makes all the difference,” says Jenny.

“Nurses can give confidence, strength and reassurance.

“We still keep in touch with Tina, Emilia’s nurse at Queen Square. If Emilia is in LA, she will phone with any questions she has and get those answers from Tina, which shows the level of bonding and trust.

“Through our work, we want to help create holistic rehabilitation, which we describe as being for ‘brain, body and mind’. We aren’t ashamed about using non clinical language because that’s how survivors think about it.

“Every person with brain injury wants to be treated as a whole person so motor, cognitive and emotional support is essential for the best possible recovery.”

Another initiative is to support and popularise the use of telerehabilitation for brain injury, through its work with N-ROL. Having initially been piloted at UCL, N-ROL aims to reduce social isolation and improve self-efficacy for ongoing post-stroke recovery by providing high quality, group-based online neurorehabilitation to patients denied conventional therapy due to COVID-19.

It is now being rolled out into East Lancashire Hospitals NHS Trust, working alongside the University of Central Lancashire.

“Technology is so important, and telerehabilitation has to be an essential part of the recovery pathway,” says Jenny.  SameYou is partnering with Visionable, a pioneering healthcare techniology company who are using their advances to improve the stroke and brain injury pathways.

“Like with UCL, East Lancashire are committed to neurorehabilitation. We funded a pilot there and are trying to find the money to broaden that to other Trusts in their area.”

While the pandemic has delayed one of its most eagerly awaited initiatives, the three-year project with Spaulding Hospital in the United States – which explores the interplay between physical, mental and social challenges of brain injury survivors – happily it is now set to get underway.

“We recruited the cohort and then COVID came, but the project is now starting,” says Jenny.

“We are looking at young adults’ resilience after brain injury, it is biopsychosocial research. One of the lovely things is that a lot of the team are young investigators, brilliant and very qualified to understand the issues.”

With great progress already being made for the startup charity, its mission to truly make brain injury more accepted, with more resource channeled into care provision, is one that will only grow.

“With cancer for instance, you can ‘box’ it, whether it’s in the breast or the bowel for example, but when your brain is injured there is the sense that your brain has let all of you down.

“When you have a head trauma, people often tell us they think it’s their fault, any sort of brain injury is shockingly sudden and totally unexpected so there is no time to prepare yourself.

“With endovascular coiling, which is used to treat an aneurysm, it’s a procedure which I found out uses technology that started 20 years ago. Every minute we’re getting new upgrades and updates on your phone – why not here?

“We are a catalyst for change and are convening the most innovative minds in neuroscience, technology and neurorehabilitation to collaborate and put survivors at the heart of change and make a positive change.

“That’s what we want to do – play our part in making brain injury recovery better.”

Patient story: “Covid wasn’t as scary for me as the after-effects were.”