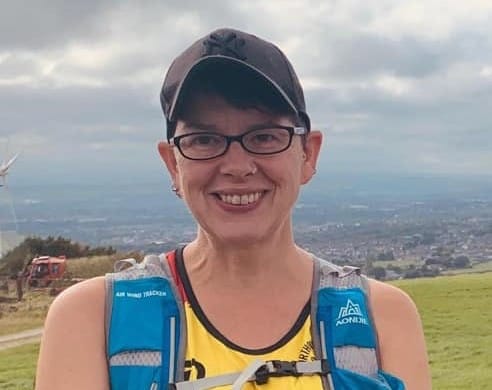 Having suffered a brain injury which left her struggling to rebuild her life, Helen Whiteley found salvation in running. Here, she tells how she went from running for the first time to completing the Virtual London Marathon in only eight months.

“On November 24, it will be eight years since I suffered a traumatic brain injury (TBI) from a fall at home. I was found unresponsive at the bottom of my staircase at home by my husband Simon; I have no recollection of how I got there.

“I was initially taken to Huddersfield Hospital but once I was stabilised I was transferred to the Leeds General Infirmary neurosurgery department. It was here I was diagnosed with an acute subdural hematoma and fractured skull and was taken immediately into surgery for an emergency craniotomy to evacuate the hematoma. I was then placed in an induced coma on the neurosurgery ICU ward, where I stayed for a number of weeks.

This period was extremely traumatic for my family, especially my daughter Isobelle and son Isaac, who were only 13 and 9 at the time. My family were told that is was unclear as to whether I would regain consciousness once the drugs were withdrawn, and if I did, what permanent physical and mental disabilities I could be faced with for the rest of my life.

Fortunately, I did recover, albeit very slowly, although the brain injury has changed my life and who I am.

Following my accident, I suffered acute anxiety and was unable to leave the house and struggled with my balance needing a stick to help me walk. When I eventually was able to go out, I needed to be accompanied at all times. The simplest things were a struggle due to my lack of self-confidence and awareness of situations; I was taken out regularly by my physio to ensure I was able to cross a road safely.

I found it difficult to interact and communicate with people and was unable to cope in busy or new surroundings. I had, and still have, a very poor memory, struggle with cognitive functions and have lost my sense of smell and have a reduced taste.

I needed coping strategies like lists to ensure simple daily tasks like cleaning my teeth were completed. In February 2014, I suffered a seizure and have been diagnosed with epilepsy which is now controlled by medication.

I know I am not the same person I was before. I have no filter, speak my mind and can be immature, much to the horror of my children. These are all consequences from my brain injury.

Furthermore, I no longer work full time as an accountant for the NHS, as I had to retire due to ill heath, but I now work part time in a library which I do really enjoy.

I have been on a long challenging journey to get to where I am today but I have had the support of my family, my parents, occupational therapy, physiotherapy and the independent living teams.

Running came into the equation in January 2020, when my friend Gill signed me up for the Couch to 5K beginners running program with my local Northowram Pumas Running Club. I found the prospect of taking part in this extremely scary, very challenging and somewhat out of my comfort zone, having never run before.

At the first session I nearly went straight home but the support from the club run leaders was amazing. I progressed slowly on the programme, first running one minute then walking one minute, and slowly increasing this. On March 7, I did my first 5K park run with the Pumas. I was overjoyed that I had achieved this but then lockdown happened and everything changed.

During lockdown, I continued with my running. Through challenges set by our C25K run leader I felt confident to go out and run on my own and eventually I tried running off-road. The running club have been fantastic during lockdown, setting challenges for us to do and I set myself mini challenges, slowly progressing to run 5 miles, 10K, 10 miles, and 2 half marathons.

I had never taken a selfie before I started running, but as I made progress the pictures began to get posted on the running clubs social media. I have totally embraced the running bug and I am amazed by how far I have come in such a short period of time. 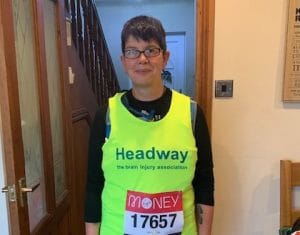 Prior to January of this year, I had never run or even thought I could after walking with a stick for the majority of my recovery to help with my balance issues. Running has helped in my recovery by increasing the confidence I have in myself and making me more independent, as well as introducing me to a new social group.

In hindsight, if it hadn’t been for lockdown, I wouldn’t have continued to run as I have. I would have been unsure of running with groups of different people and would have felt pressured. Lockdown enabled me to build up my running at my own pace with virtual support from the Pumas.

I decided to take on a new challenge and registered to take part in the Virtual London Marathon on October 4, running alongside Gill and Nic from the Pumas and following a route mapped by the running club, finishing in my hometown of Halifax at the historic Piece Hall.

This would be just a month before my 50th birthday, and nearly eight years since my life changing accident – as well as being only 8 months since I put on my first pair of trainers!

I only had one month of proper training prior to the marathon and the furthest I had run to that point was 18 miles, but I was determined to complete it. I committed to raising funds for Headway, as well as for the neurosurgery department at Leeds General Infirmary who cared for me after my accident.

I wanted to give something back, which hopefully in a small way will help support patients and their families at this critical time and to say thank you to the brilliant consultants and nurses who saved my life.

On race day, we set off from the Wraggles in Queensbury at about 8.40am. We had so much support during the run. Cars beeped and total strangers clapped and cheered us on. I was so emotional and absolutely amazed that I’d done it and finished it in 05:37:45.

I know how very lucky I have been to recover from my injuries with only minor disabilities, but there are many people who are not as fortunate as I have been in my recovery. What I am doing is for them.”

To support Helen in her fundraising for Headway and the Leeds General Infirmary neurosurgery department, visit https://www.justgiving.com/crowdfunding/helenwhiteley