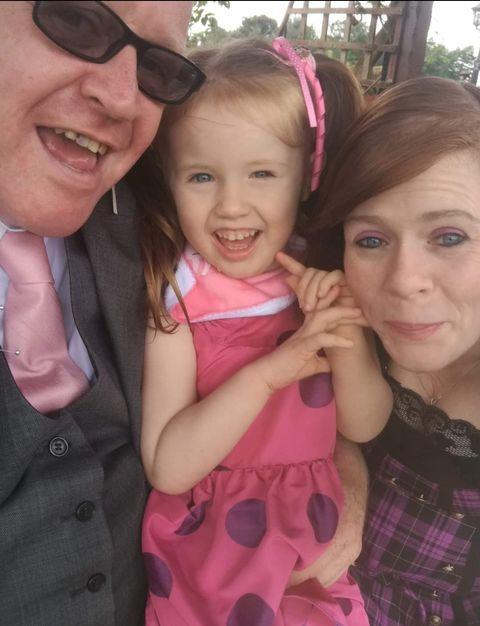 When Marie was diagnosed with a brain tumour shortly after the birth of her daughter Amelia, which left her facing three life-saving rounds of surgery, the family’s trauma continued when Amelia was also found to have a neurological condition. Here, Marie shares how positivity and practicality are the key to them getting through whatever lies ahead

“My daughter and I are the same – we both have special brains.

I was living with my brain tumour when I was expecting Amelia, and probably had been for a long time – not that I knew about it. I’d had headaches for years, but it was only six weeks after she was born, when they became absolutely unbearable, that I found out what had been happening in my brain while I’d been getting on with my life.

Three life-saving brain surgeries later and I’m still here, though I have hydrocephalus and need a VP shunt, which reduces pressure on my brain – but I could need further surgery at any point.

Amelia, my only child, spent much of her first year in and out of hospital with me, with my husband Darren bringing her to see me every day I was in The Walton Centre. I did feel she was missing out on being a baby, going to the classes babies go to and doing all the things mums do with their children, but we made the most of every minute of our time together.

I did notice her lack of development and the fact she just wasn’t doing what other babies her age were doing, but I was told babies all develop at their own rate, in their own time, and not to worry about that.

Through being in hospital so much, it made me feel so guilty for being away from her, and thought maybe that could be why she was behind where other babies were developmentally?

She had certainly not had the start to her life we imagined. There was one point where I was particularly ill, and no-one was sure I was going to make it. I whispered to Amelia to ‘look after your daddy’ if I didn’t pull through.

For all the staff at The Walton Centre are amazing, and the care is fantastic, being on a neuro ward is very difficult. Fear, dread, huge amounts of pain and no idea what fate awaits you are the overriding emotions. A lady in the bed opposite me, who looked so glamorous and – physically, at least – appeared less ill than I did, passed away. How are you to know whether you’re going to be next? It was a very scary time.

After such an awful experience, the very last thing I’d ever want for Amelia – for her to have a neurological condition too – began to increasingly look like reality.

For all people were telling me that children develop at different rates, I was part of a global Facebook group of mums whose children were all born in the same month of the same year. There were kids in there saying the whole alphabet – Amelia wasn’t even saying ‘da’.

Clearly something was wrong, and while it took a while to get anyone to listen. I asked our health visitor to come and do an ages and stages assessment and there were red flags all over the place. We were referred into children’s disability services and Amelia had so many tests – thankfully her MRI scans came back clear, which confirmed there was nothing seriously wrong medically, which was a huge relief.

But there was something wrong – although to this day, as she approaches her sixth birthday, we still don’t know exactly what. Amelia is non-verbal and has global development delay, which is an umbrella term across a host of developmental neurological issues, although we haven’t got a more specific diagnosis than that. Our neurologist said we may never get a ‘label’ for her condition, but we don’t need it.

Two neurological conditions in one family of three – who would ever have thought that could happen? You couldn’t make it up! We’re going to have some genetic mapping done at Liverpool Women’s Hospital in the coming months, to see if there is more to it than just bad luck, but for now we don’t know.

Day to day, Amelia now has a host of therapies and support in place, including speech and language therapy, physiotherapy and occupational therapy, and we used to have some brilliant portage workers who came out to support her, although at that time her development was so delayed, she didn’t benefit from it. However, now I feel she’s at a stage where she would, and is finally interested in a shape sorting toy, so I’m training to be a portage worker myself, so give Amelia more of the support she needs at home.

She was diagnosed as having epilepsy just before lockdown and while her medication seemed to be working well, at the start of this year she began to have regular seizures. As she’s only five, she’s growing quickly and her medication is based on her weight, so hopefully we can get that right – but the medical support is amazing, we have a WhatsApp group where I can send a video to our nurse, who will then show it to a consultant, and they’ll come straight back to us. It’s helped us to cope so much better.

But we’ll get on with life, and the last thing I ever want is for anyone to pity us. When I was in hospital after my second operation, I did look terrible, having lost some of my hair, and I felt absolutely dreadful. I heard one of the visitors saying to the person opposite, ‘Look at that poor girl over there’. That really changed my whole attitude at that point, as there’s nothing ‘poor’ about me, so my answer was to shave my head. I raised £1,300 for The Walton Centre by doing so.

We would never ask ‘Why me? Why us?’ Because why not us? This could happen to absolutely anyone. Acceptance has been hard to achieve, but you learn that while you may not be able to control the future, you can certainly make the most of today. I’m always thinking ‘What does Amelia need her today? What can I do for her today that will make her life better?’ I don’t spend my time worrying about later in life, or that we don’t have a diagnosis for her – we just take it a day at a time.

I’m now preparing to take part in the virtual London Marathon, where I’ll cover the whole 26 mile distance in 24 hours. It was something I first discovered when I was awake at 4am one day, and decided to go on Facebook. It sounded really interesting and is the next stage in my quest to push myself, while being mindful that I still have the shunt.

I took up running at an early stage in my recovery, and exercise gave me milestones to aim for. I started with walking 15,000 steps in a day, which was a huge challenge at first, and built from there. I’ve since built up to doing quite a few virtual races outside and I also climbed Ben Nevis in 2018 – and importantly, I even made it to the top before my husband!

I do what I can and won’t be dominated by the effects of what happened to me. I still struggle with my memory and have Alexa devices and whiteboards all over the house to help me remember, and my husband counts the tins of dog food to make sure I haven’t forgotten to feed our dog. It’s really important that I keep hydrated, so I have a 3.6 litre bottle I know I have to drink by the end of the day. We’ve developed various tactics around practical tasks to get by, and we do.

As for Amelia, she absolutely loves her school, and we’re out every morning walking up and down the road, waiting for her bus to come. Sometimes she doesn’t want to get off when she gets home as she’s had such a great time! She’s happy and loved, and whatever lies ahead for her, we’ll get through it together, as we always have and always will.”

‘I didn’t know this could happen to a child’

Rebuilding our lives after brain injury