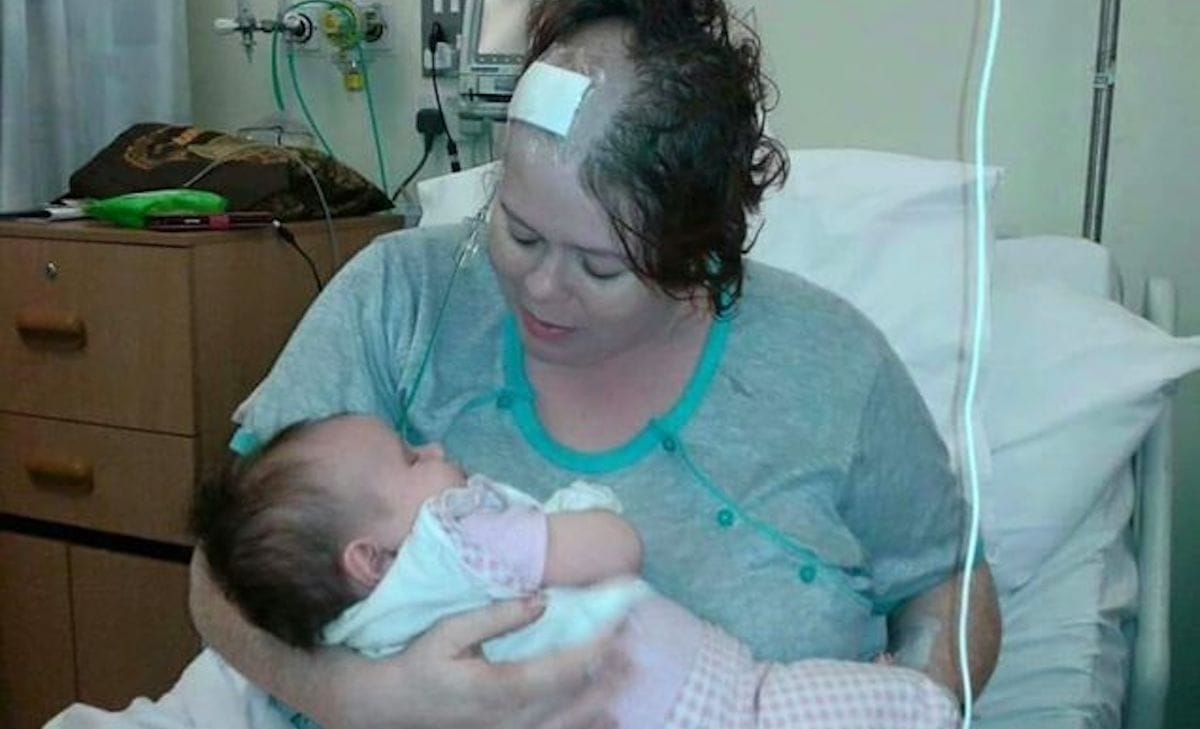 Marie is looking to raise money for The Brain Charity

A woman who had to learn to walk again after being diagnosed with a brain tumour only weeks after the birth of her daughter is now set to run the London Marathon.

The 45-year-old had suffered from severe headaches for seven years, which had become unmanageable after Amelia’s birth, and also developed dizziness and loss of balance in the days leading up to her diagnosis.

Marie was rushed to The Walton Centre where she spent more than a month as she underwent three brain surgeries, the longest of which lasted eight hours, before battling meningitis – all while trying to be a new mum from her hospital bed.

The trained counsellor also discovered she had a Chiari malformation, where the brain pushes down into the spinal cord, and hydrocephalus, a build-up of fluid on the brain, as a result of the golf ball-sized tumour.

After her life-saving operations, Marie needed physiotherapy to be able to stand on her own and then had to re-learn to walk after her ordeal.

But now, Marie is set to take part in the virtual London Marathon from her home in Haydock, St Helens, and hopes to raise at least £300 for The Brain Charity.

“The night before my first brain surgery, I said goodbye to Amelia and my husband Darren,” recalls Marie.

“When Darren went to the toilet, I whispered to Amelia ‘look after your daddy’.

“After the operation I struggled to walk, but I did it.

“At first, it took two physios to get me from my bed to the nurses’ station and when I first left hospital, I could only do 300 steps per day – even just going to the shops was exhausting.

“But I kept pushing my boundaries. I appreciate my legs and the ability to use them every single day, because some people with neurological conditions are not as lucky.

“So what better way to celebrate life, as well as beautiful and miraculous brains and legs, by completing the Virtual London Marathon.

“I’ve never run a marathon – everyone thinks I’m crazy but they know I’ll be able to do it.

“My plan is to run as much of it as I can, but I am happy to walk or crawl too.”

Marie will have 24 hours to complete the 26.2 miles on a course of her choice.

While this will be her first marathon, she is used to cycling and walking long distances and has also lost four and a half stones since her diagnosis, going from a size 26 to a size 12-14.

Marie has chosen to support The Brain Charity, a Liverpool-based charity which works nationally with survivors of neurological injuries and conditions, in recognition of the counselling they gave her during her recovery.

She was also keen to support their cause as her daughter Amelia, now six, was diagnosed with severe learning disabilities before her first birthday; she has global development delay, epilepsy and is non-verbal.

Marie and husband Darren do not know whether Marie having a brain tumour during her pregnancy may have caused these conditions, as so far genetic testing has not given them answers.

Marie still has hydrocephalus and needs a VP shunt, a medical device that relieves pressure on the brain by reducing the accumulated fluid, meaning she could need more emergency brain surgery at any point.

Marie, who is now a full-time carer for Amelia, says: “The way things happened to our family – you literally couldn’t write it.

“Who has triple brain surgery and then it turns out their daughter has a neurological condition too?

“But in a way, we’re grateful as everything we went through with my brain, made us stronger to be able to help Amelia.

“She, too, struggled to walk but did it – she does so many things we never thought she might be able to do, and she brings us so much joy every day.”

The 45-year-old said The Brain Charity’s counselling sessions were a lifeline in helping her come to terms with not just her own experience but Amelia’s diagnosis too.

Marie was offered the counselling, which is free to anyone with a neurological condition, after speaking to The Brain Charity’s staff who are based at The Walton Centre.

She added: “There was one point where for about 48 hours I was waking up and I didn’t want to wake up. I was in a dark place, I felt like I was being tortured.

“It was so difficult being away from my baby, Amelia was at home just six weeks old.

“But my counsellor was absolutely amazing, it was the best thing I could ever have done.

“The Brain Charity gave me an incredible gift – it was life-changing and amazingly supportive.

“I needed a specialist who understood neurological conditions – not many people know what a wide-reaching impact they can have on your life.

“The Brain Charity gave me perspective. It taught me to accept ‘this is life’ and that just being able to do the dishes is a gift.”

Gender and TBI – are women at a disadvantage?

Let’s be virtually successful together