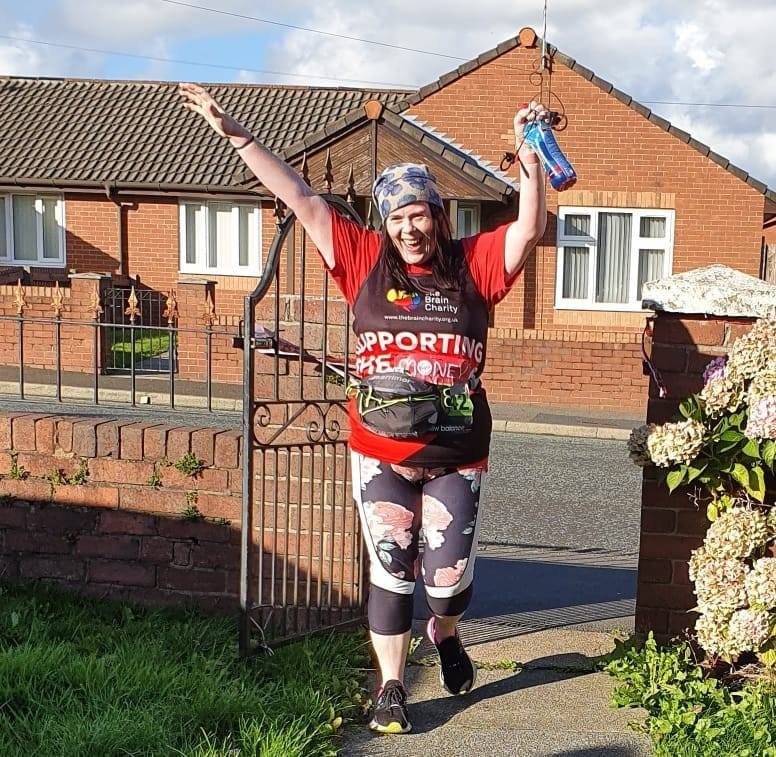 A woman who had to learn to walk again after a brain tumour has completed the virtual London Marathon.

Marie Garnett was diagnosed less than six weeks after giving birth and said goodbye to her husband and newborn daughter Amelia before undergoing three life-saving operations.

During her six-week stay in The Walton Centre in Liverpool, Marie also battled meningitis and discovered she had a Chiari malformation, where the brain pushes down into the spinal cord, and hydrocephalus, a build-up of fluid on the brain, as a result of the golf ball-sized tumour.

The new mum was left needing intensive physiotherapy to regain the ability to walk and continues to live with ongoing effects of her surgery in 2015.

But on Sunday, inspirational Marie completed the virtual London Marathon, running and walking the 26.2 mile distance on a route around her Liverpool home which she completed in seven hours 15 minutes.

Describing herself as going from “couch to marathon in eight months” – during which time she also contracted COVID-19 – Marie’s determination came from the desire to supporting two organisations she credits with saving and helping to rebuild her life – The Walton Centre and The Brain Charity – and to show survivors what is possible.

“I’m still in shock and a bit of denial that I’ve done a marathon. I want to raise money for the two charities who helped me physically and mentally with my recovery, but probably more than that, I do it for people like me,” says Marie, a former civil servant and trained counsellor.

“I had a comment on social media from one person who is in The Walton Centre now who has recently had brain surgery, saying it gives them hope they too might be able to do this one day.

“For people in hospital recovering from anything, I hope they can see what can be possible. You might not get the life back you had, but the life you go on to have might be even better.

“When you Google your condition, which of course you do, there are a lot of really awful negative stories which do make you worry about the future. But I would say to people that while your illness may never go away, I still have health conditions, don’t let it define you in a negative way – although by all means let it definite you in a positive way.”

Marie has been determined to live with a positive and practical outlook since her diagnosis with a brain tumour, which also helped her deal with the news that her daughter Amelia also has a neurological condition. 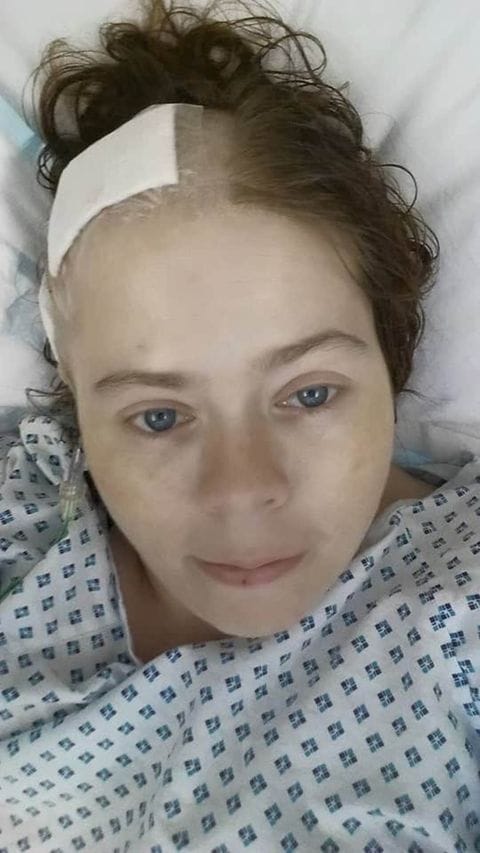 Marie while in The Walton Centre

“There are some things you can’t change, like the fact I have a shunt in my head and have a brain injury, but all of your days can’t be sad because of that – you have to live your life,” says Marie.

“You don’t have a crystal ball, you don’t know what the future holds, so you have to live for today. If you’re worrying about the future, you’re missing out on today.

“I’ve been through the recovery where I had to learn to stand, taking my first step after surgery, holding on to the wall to get to the toilet, building up to 300 steps in a day – it’s a slow process and there is no quick fix.

“It has taken me years to get to this point physically and mentally – but I hope through completing a marathon, I can show that if I can do it, other people can too.”

Having built up to being able to complete the London Marathon through adopting the ‘Jeffing’ technique – a combination of running and walking for long distances – Marie said she exceeded even her own expectations on her time.

“We had a little party at home for me getting back and I said I’d probably take nine hours – but had to call and say I’d be back a couple of hours early,” says Marie.

“I did enjoy it on the day. I listened to podcasts and then motivational music at the end and smiled and sang at the top of my lungs – I did cry a little bit as well. But it was such a positive day, really happy, and I’m so pleased that I’ve done it.”

“Not only has she raised much-needed funds for our front-line services, she is a true inspiration to our clients and to all brain tumour survivors.

“Having learned how to walk again and gone on to complete the famous 26.2 miles of a marathon, she has shown people living with all forms of neurological condition that anything is possible.”