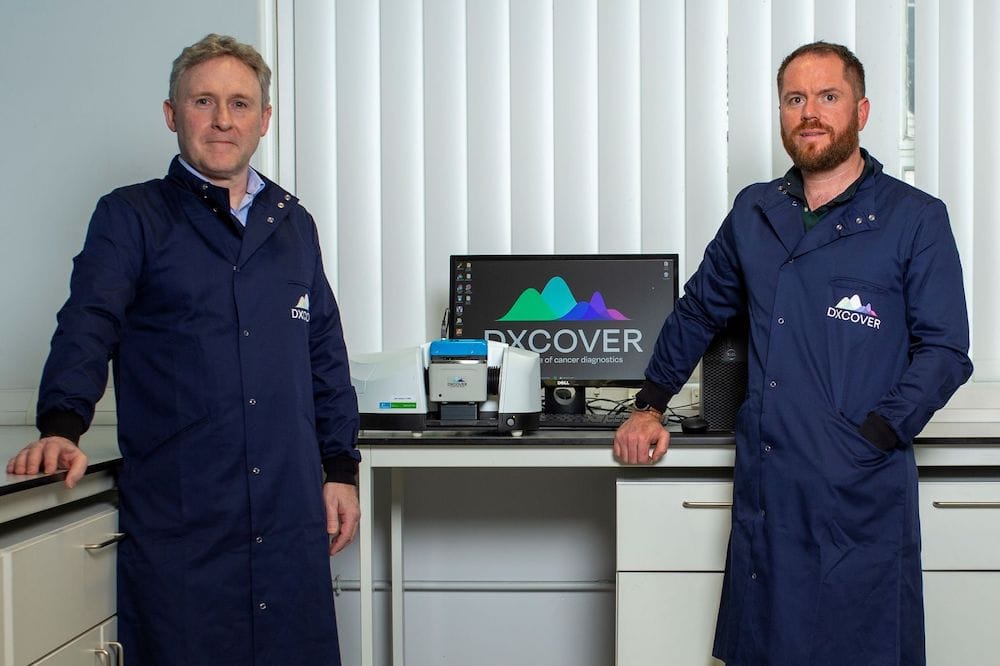 Hailed as the future of cancer diagnostics, Dxcover is set to revolutionise healthcare by pioneering a new test to diagnose cancer more quickly, simply and cost-effectively than ever before. CEO Dr Mark Hegarty and chief technology officer Dr Matthew J Baker discuss their pioneering work to date in brain cancer detection

Through the AI-led analysis of a single drop of blood, it is possible to detect brain cancer.

Having been verified through two groundbreaking clinical studies, the Dxcover Brain Cancer liquid biopsy, the first of its kind in the world, is now set to go into pivotal trials with a view to commercialisation in 2024 – paving the way to save lives and improve quality of life globally through the earlier diagnosis of cancer.

With the creation of the Dxcover Platform – which combines novel hardware with artificial intelligence algorithms to analyse a patient’s blood – and its patented Drop Dry Detect method of detecting cancer, a process which currently may take eight weeks or more to fully diagnose can be fast-tracked into a matter of minutes.

At a time when COVID-19 has increased waiting times for cancer diagnosis and treatment dramatically, the creation of a technology which simplifies and quickens the process of diagnosis is being widely supported, with £5.1m raised to date to progress its work.

And its application is also set to be extended into other forms of cancer, with the Scottish startup currently developing liquid biopsies for individual cancers through its Dxcover Cancer project, as well as a multi-cancer test which could detect many forms of the disease.

The business, which began life as a research project at the University of Strathclyde and spun out in 2019, plans to launch its first life-saving technology initially in the United States pending the success of the pivotal trial and regulatory approval process.

Dxcover – which recently rebranded from ClinSpec Diagnostics, and now also has the tagline The Future of Cancer Diagnostics – has also expanded into laboratory and office space in Glasgow three times the size of its former base, to help facilitate its ongoing growth and further development of its pioneering work. 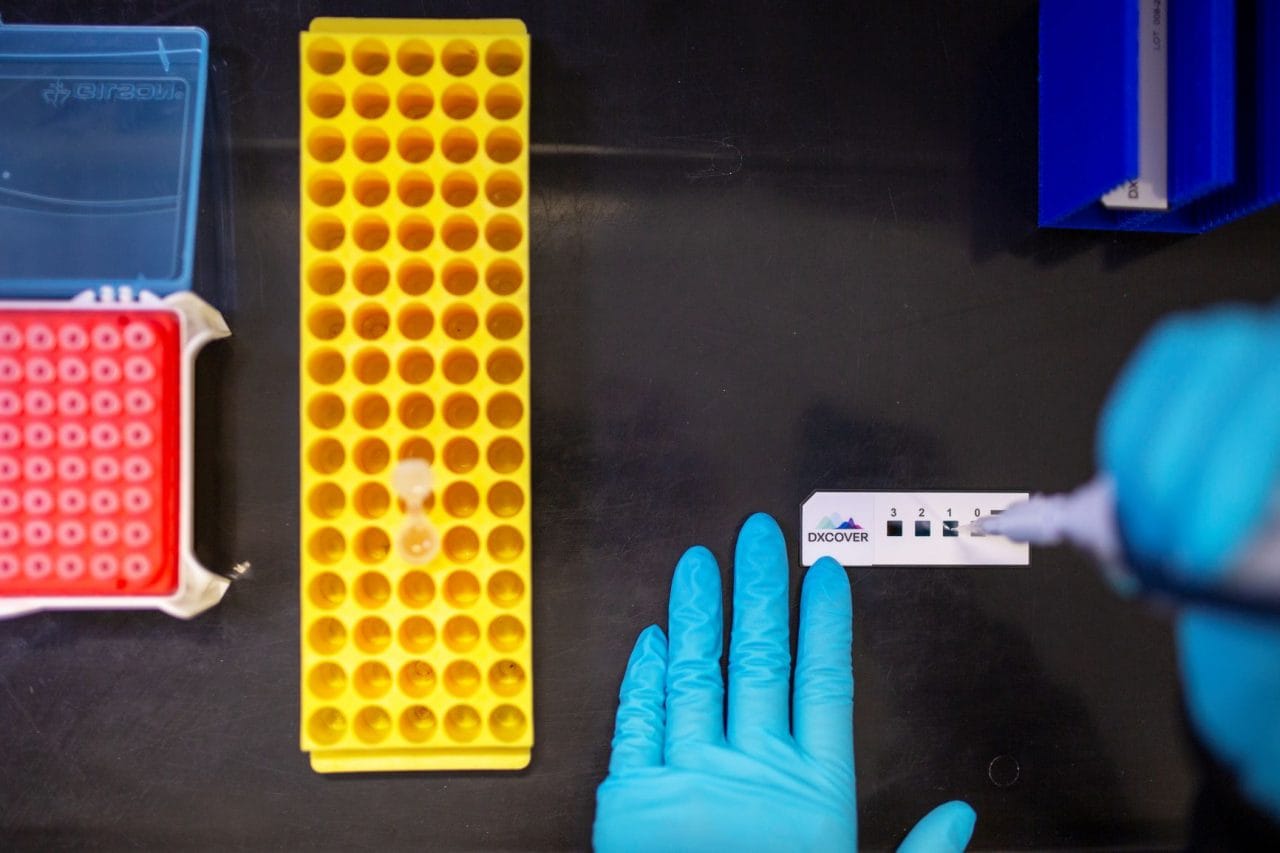 “We work on the basis that every day counts – for patients who need a diagnosis and treatment, for doctors looking for better diagnostic methods, for healthcare service providers who want to do things more efficiently,” says Dr Mark Hegarty, CEO of Dxcover.

“But the day we will be able to say this company is successful is the day we can say we have saved a life.”

The company’s journey towards its lifesaving aims began in 2012, when Dr Matthew J Baker began his first experiments to establish whether a biopsy could be analysed by AI to distinguish between cancer and non-cancer diagnoses.

Once the potential of his work was realised, Dr Baker – an inventor with over 18 years’ experience in the field of clinical spectroscopy – patented his spectroscopic liquid biopsy technology and was introduced to Dr Hegarty by the University, who were keen to bring in the expertise to support the development of such game-changing research into a viable business which could apply its technology around the world.

Dr Hegarty, with over 20 years of experience in supporting startups and healthcare products into international successes, immediately recognised the potential of what Dr Baker had created – and the two men also realised they could work together effectively – “We both like fast response times and are not afraid of hard work,” says Dr Hegarty.

And from there, Dxcover has progressed into a venture with the clear potential to transform cancer diagnosis as we know it, leading the way in the marketplace with its innovation.

“Most research focuses on genomic data, the big US companies are focusing on the genetic information from the tumour – but ours is different and looks at the entire signal from the serum. We don’t just look at tumour markers, we look at the human response. That is then teased apart by machine learning.

“There isn’t really another company out there with our approach, and we hold the patents for the diagnosis of all cancers, so no-one can do exactly what we do. Our platform methodology can handle any serum sample, it’s exactly the same analysis, so there’s great potential.”

Supported by a hugely capable and growing senior leadership team – its most recent appointment being operations director Dr David Eustace, an experienced figure in regulated diagnostic product development – Dxcover is working to a clear plan of how to build its cancer diagnosis offering.

“The most important thing at this stage is being able to add more data. Everything depends on the quality and value of the data. The growth of our data set is the key thing,” says Dr Hegarty.

“Our Dxcover Cancer project is a multi-cancer study aimed at developing a test to detect several cancers from a single blood sample, and also to indicate the organ of origin. That would be very beneficial for clinicians are often faced with vague symptoms, making it very difficult to pin down whether a person has cancer and the type of cancer.”

While its initial target for Dxcover Brain Cancer rollout will be the United States, the company continues to be based in its native Scotland, where it has progressed so strongly, benefiting from the backing of the Scottish Enterprise High Growth programme in its earliest days, which the team credit with being crucial in its development.

“We may well add an office in Europe as we progress, and will definitely have an office in the States sooner rather than later,” says Dr Hegarty.

“We are also looking to attract a highly-experienced set of US advisors, which we believe will be key to our growth.”

Dr Baker adds: “Being based in Glasgow gives us access to great young talent coming from the universities, we haven’t had any issues in employing the next generation of spectroscopists. For me, having our R&D hub here we benefit from the health tech ecosystem in Scotland, and it fits perfectly with what we want to do.

“We have a great team and strong values and we’re all working towards the same thing – saving lives.”