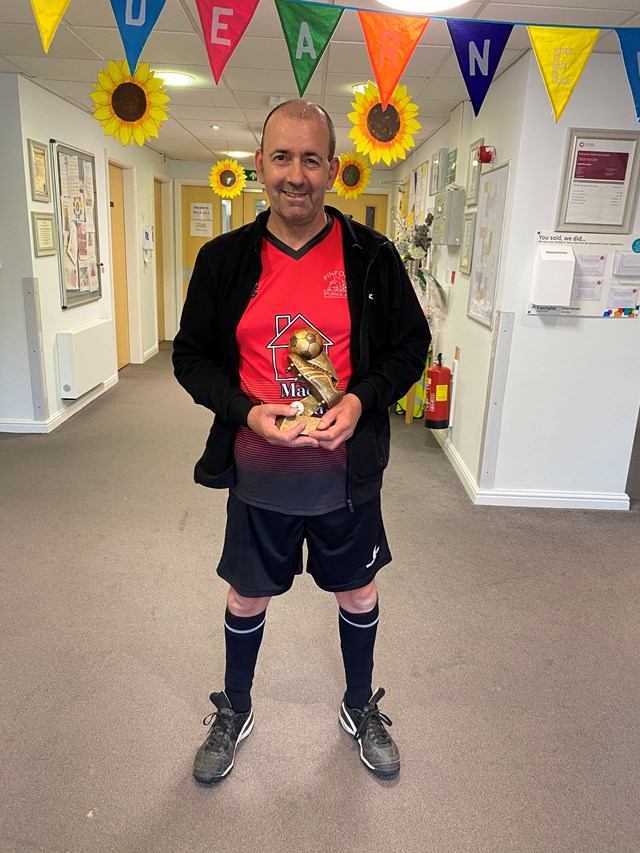 Following a serious fall, John had a brain injury that led him to experience reduced mobility, poor vision and difficulties communicating.

Following his injury, John experienced reduced mobility, poor vision, difficulties with communication and swallowing, and he developed behaviours of concern.

Before John’s fall, he owned a building business and worked seven days a week – his only rest time was Sunday afternoon when he went to his local working men’s club for a rest and a pint. John’s spare time was spent with his young daughter or playing football. He also coached the local pub football team.

With one-to-one support from the care team and input from the life skills team at Dearnevale, John has made great progress in his recovery. He is now able to mobilise independently, has had his PEG feeding tube removed, and enjoys living a fulfilled life.

After his injury, John started to display behaviours of concern. 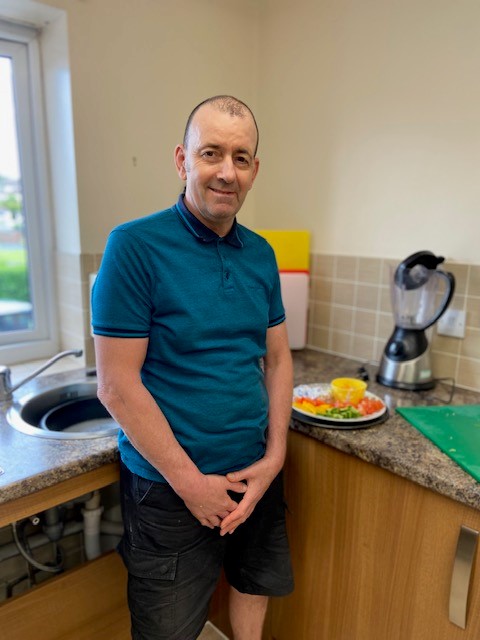 The trained team at Dearnevale has helped him to develop strategies to recognise when he is experiencing periods of agitation that could escalate to behaviours of concern.

Our high staffing levels enable John to progress at his own pace and build trust with the care team.

He is now able to vocalise to staff when he’s feeling agitated or the sensation that he’s becoming agitated. He recognises when he’s about to experience seizure activity and will seek assistance and take time out to enable these symptoms to be managed before escalation.

During his time at Dearnevale, the number and duration of incidents of behaviours of concern have reduced dramatically.

At Dearnevale, the team has supported John to rebuild his mobility.

When John first moved to Dearnevale, he was at high risk of falls and received one-to-one support to support him to mobilise safely.

Over the past few years, John has enjoyed sessions with the in-house Physiotherapy Team to build his body strength and range of movement.

John enjoys walking in the local community and goes to football training and plays on a local team. He’s just started jogging with a coach to build his fitness.

Specialist care from a trained team

John has received input from Dieticians and Speech and Language Therapists (SALT). He stated that he preferred to receive support from Dearnevale colleagues, and since doing so, he’s had his PEG feeding tube removed and he’s able to eat and drink orally.

At Dearnevale, the team has encouraged John to develop his life skills and build his independence.

He enjoys regular sessions with the in-house life skills team at Dearnevale. These sessions focused on improving his independent living skills and social integration.

John has developed his hand and eye co-ordination and enjoys completing the Rubix cube. He asks staff to mix the cube for him and has successfully completed the puzzle 423 times!

John has also developed his level of concentration and has begun playing the keyboard, as he did before his injury. He is completing self-taught lessons that he accesses online, with the aim of performing at the Christmas talent show.

With the support of the team, John has begun preparing his own meals in the therapy kitchen.

He loves helping out in any way he can, and volunteers to clean the therapy kitchen and hoover the training every Monday.

Over the next 12 months, John has expressed that he hopes to continue building his independent living skills.

“I’ll tell you the truth, Dearnevale is fantastic. The people here are always here for me, they’re fantastic. They did this for me and I am gobsmacked I have got so far.”

The home, located in Grimethorpe near Barnsley, is rated ‘Outstanding’ with CQC and is quality assured by the Huntington’s Disease Association.