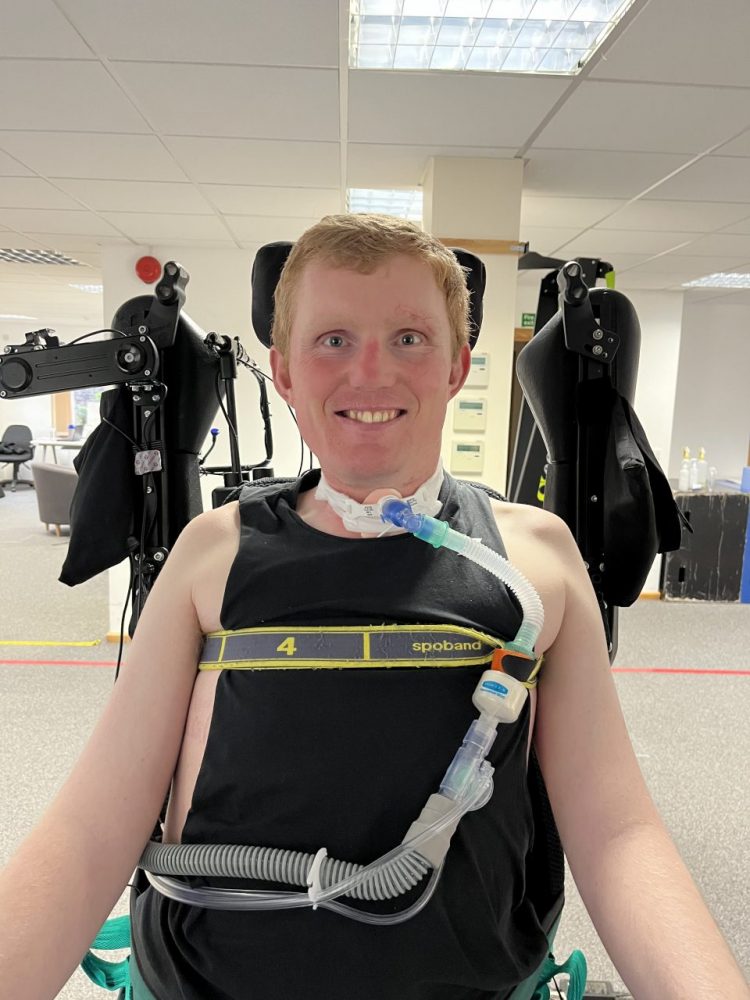 It’s an all-too familiar story that Neurokinex hears when clients first get in touch. After excellent – and sometimes life-saving – care within the NHS and specialist spinal cord rehabilitation sites, individuals are discharged into their community to get back on with life. Often, they are told ‘this is it’ in terms of their rehabilitation and recovery.

As we know, people able to access specialist spinal cord injury rehabilitation sites and engage with highly skilled trainers using the latest technology and protocols, can go on to defy the diagnosis given at their discharge.

But what of those people who have a cervical spinal cord injury? Can rehab really help a tetraplegic who is reliant on a ventilator and able only to move their head independently? What can rehab realistically achieve for these individuals? Are trainers and therapists not wasting their time and is it not, in fact, fair to say in such cases that ‘sorry, there is nothing more we can do’? 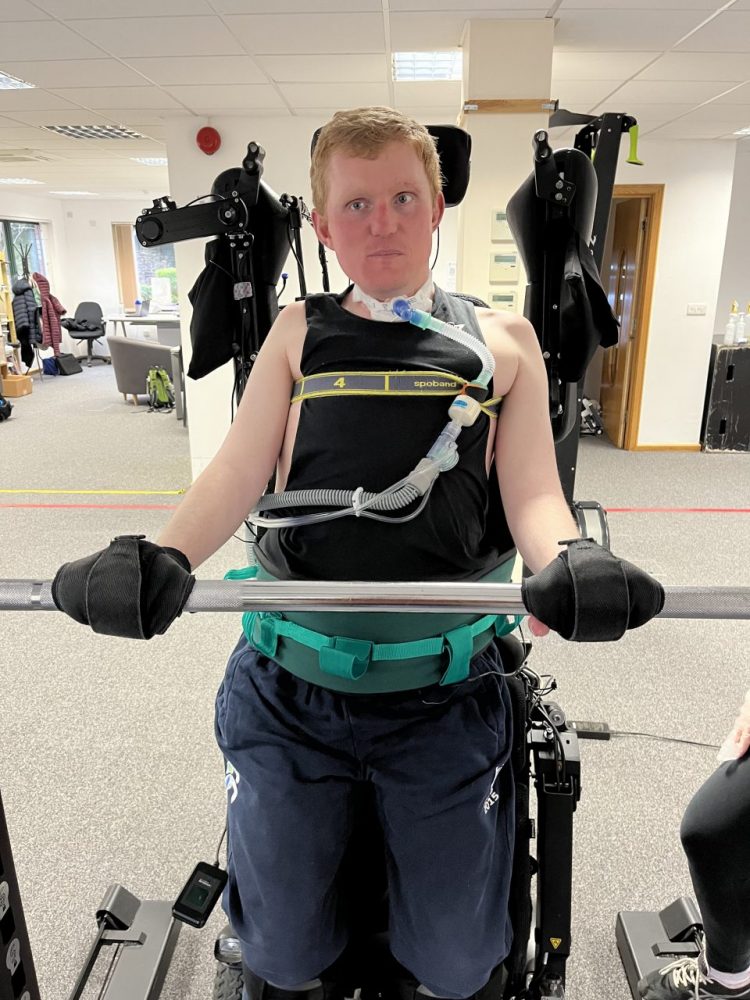 Speaking to Rob Camm, it’s abundantly clear that despite his C3 ASIA A injury, rehabilitation is nothing short of life-changing.

His gains may be neither immediately evident nor dramatic, but they are no less important to Rob. His experience should be a lesson to everyone who thinks ‘writing off’ a high-level injured client is acceptable.

“I was injured in a car crash when I was 19 – it was the summer holiday just before I was due to start university,” says Rob, now 28.

“My injury left me paralysed from the neck down. I’m able to turn my head and shrug my shoulders but am reliant on a ventilator to breathe and need round-the-clock care.

“To other people, such injuries may appear insurmountable, but I believed – and now know – that even the smallest gains can make a big difference.

“I had seen the extraordinary work pioneered by Christopher Reeve after his injury – which was a similar level to mine. He refused to accept defeat and so did I.

“My plans to go to university were delayed but I got there in the end and then went on to secure a training contract with Bristol law firm Osborne Clarke after I graduated in 2017.”

“Despite having the highest level of injury being treated at Neurokinex, I see a huge value in their rehabilitation work. Neurokinex has built my endurance and enabled me to do things like sit up straighter in my chair, stand longer at my desk and manage a full day at work,” says Rob.

“I’m better able to operate my chair which brings me more independence and have been given confidence from my increased ability to study and work. Before my accident, I was very active and Neurokinex is like going to the gym for me: I feel good afterwards and it makes a really big difference.”

“When working with someone who has a high-level injury you need to rethink rehabilitation goals and ambitions,” says Matt Pollock, Rob’s trainer at Neurokinex.

“It’s important to never lose sight of how the small gains can make a big difference and how, for someone like Rob, success is measured in subtle changes and improvements.

“My primary goal for Rob’s therapy has always been to create an environment in which he could push himself.

“We have worked together to create exercises which allow Rob to work towards a high level of independence with the task. Given Rob’s injury level it can be easy to lean into his dependency, without recognising his ability: however, I have found that with a little bit of creativity that we can produce an environment that more greatly satisfies his need to work hard and achieve, key requirements of any sporty or active individual.” 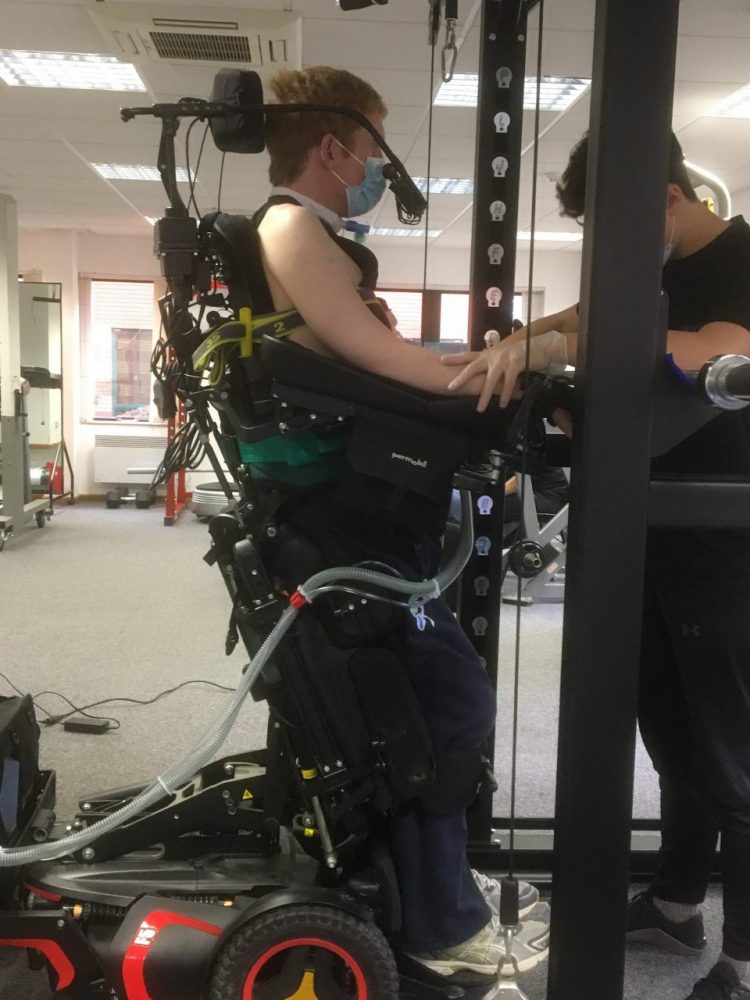 “It was important for Rob to have the opportunity to see his performance with exercises,” says Matt.

“We discussed early on that given his significant motor and sensory loss it was more challenging for him to understand and visualise what was required of an exercise or movement or how much he was participating. We therefore set out with the plan of creating exercises which had a visual outcome or goal, such as moving an object, or a numerical performance target.

“More recently, Rob has been taking advantage of our Wide Pulse Electrical Stimulation Therapy (WPS) which has meant that we have been able to push the limits of his therapy further.

“As Rob says, being able to better manage his blood pressure and increase his standing tolerance have been big goals for us and Rob has progressed from completing all our sessions in seated positions to being able to complete a full two hours standing whilst performing intensive and challenging exercise.

“I have also seen great improvements in Rob’s tolerance for exercise, strength and endurance (through his available movements) and pain management. His recent completion of a 13-mile rowing challenge was a significant milestone and evidence of his improvements.”

As with all rehab clients, the mental attitude and commitment of the client is key to success and Rob’s determination to succeed is unmatched.

“Rob is one of the most determined people we’ve ever seen and sets a great example to other clients,” says Matt.

“I’ll admit that my gains may sound intangible but when you add it all together and consider my general fitness and the mental release I have from working out, it’s worth every minute!” says Rob.

“I’m no different from other people who like going to the gym: it makes me feel good physically and mentally.  I was very active and sporty before my injury and wanted to stay active: it makes a really big difference.”

Neurokinex has other tetraplegic clients who feel similarly. One client travelled from Warrington to its Bristol centre (150 miles each way) for his rehab saying the stamina he gained from being able to sit up and work was amazing. He also loved the endorphin rush he got from his sessions 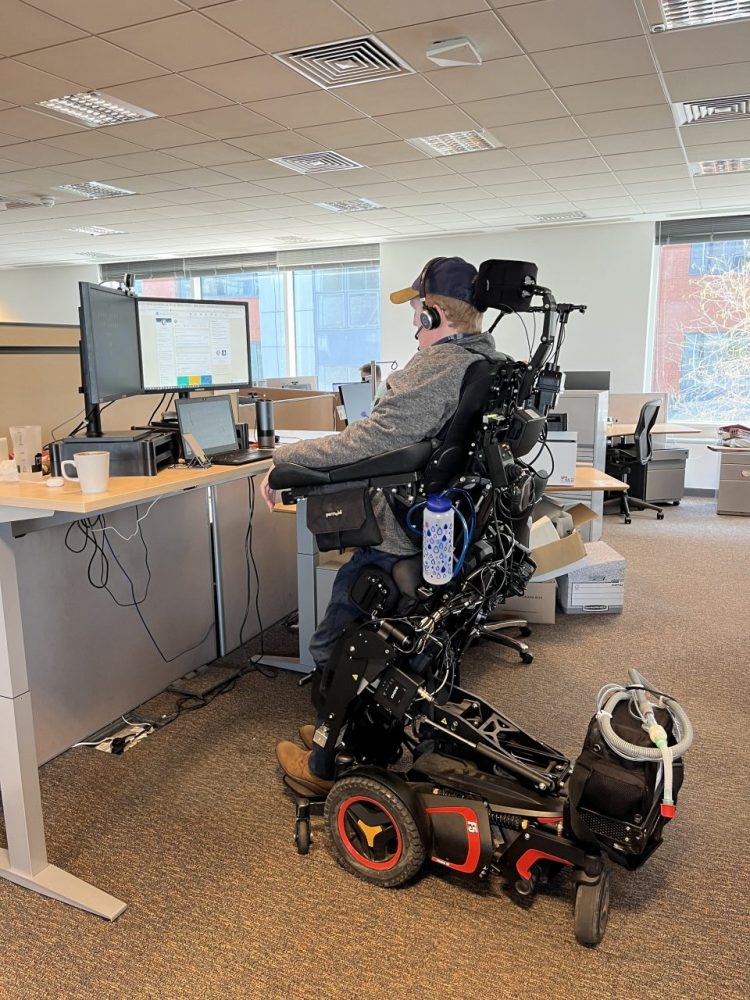 and said they made him a better, happier person for two days after training.

As for Rob, he works four days a week and takes Fridays for his rehab sessions, saying his Neurokinex rehab is ‘non-negotiable’.

His workplace understands and has gone to great trouble to give Rob all he needs to do his job. They have provided assistive technology including voice recognition software and a height adjustable desk.

“It’s essential that I stand while I work to help maintain my blood pressure,” explains Rob.

“If you’re able bodied, your muscles pump the blood around your body, but I only have my heart doing this – so if I’m not careful I get that sensation of when you stand up too quickly and your head spins!

“My wheelchair has a standing position so that works well at the desk. Thanks to my rehab, I can stand most of the day which is a much better way for me to work.”

So, while on the face of it the gains achieved by high-level injury clients may seem very small, they are very valuable too.  It is most certainly time to challenge the view that people with cervical spinal cord injuries should be ‘written off’ from receiving specialist rehab.

Everyone – regardless of their injury level – should have the chance to make improvements.

‘Getting the foundations right is a platform for growth’